The Truth about your Pool Water 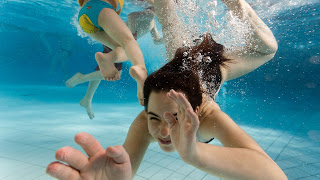 The Truth about your Pool Water

September 24, 2016 In Uncategorized
If you ever needed another reason to “behave properly” in your pool, scientists have recently found a doozy.
If the simple gross-out factor isn’t enough to keep you from seeking a proper toilet, here’s another: Uric acid, a chemical in your

you-know-what, can combine with the chlorine in pools to create a nasty bit of chemistry. Chlorine in pools kill bacteria like E. coli, but that doesn’t mean it doesn’t form its own irritants.


Scientists in the U.S. and China joined forces to figure out why two compounds, trichloramine and cyanogen chloride, were popping up in pool water. And they traced them back to chemicals whose most likely source was bodily fluids … namely, urine.
Cyanogen chloride has been used (in much larger doses) in chemical warfare, and trichloramine can irritate lungs and aggravate the skin. There have been a few cases of people getting really sick from the compounds, says Purdue University researcher Ernest Blatchley III.
There are more than 8.5 million private pools in the U.S., and another 309,000 commercial ones, according to 2013 data from the Association of Pool and Spa Professionals.
That’s a lot of pools. And a lot of potential for illness and disease